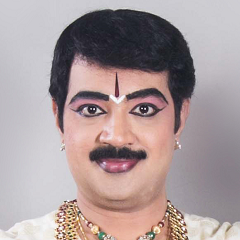 Sri. Sanjay Shantaram, as a child prodigy, entered the cultural field at the tender age of 7. Born to the most charming and popular dental surgeon Dr. M. S. Shantaram, Sanjay was inspired by the film “Shankarabharanam”, which meant a stepping stone to learn and pursue bharathanatyam. His mother Mrs.Swarna Shantaram, who initially admitted him to dance classes in the year 1980 under the tutelage of Guru Smt. G.S. Rajalakshmi, was enthralled by the way he showed remarkable progress and saw no way back. He secured the first rank for the state in his junior grade bharathanatyam dance examination conducted by the Karnataka secondary education board. His entry into the field of dance opened the doors to his entry into the field of acting. He thus began as a child actor by starring in his first film directed by Sri Hunsur Krishnamurthy titled “Bhaktha Gnyana Deva” in 1981.