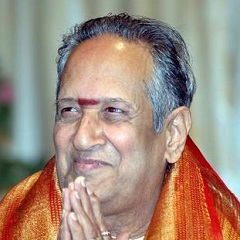 Renowned Veena Maestro Prof.R.Visweswaran is a front line artist of India, graded by the nation and its electronic media as TOP GRADE and featured in all types of national programmes of music as also on overseas channels. He is highly respected at home and abroad for his highly individualistic style in the veena, all his own, the vocal style in veena.

Visweswaran is an uncompromising purist in expounding the traditional and artistic values of Karnatak music. He is known for his innovative and explorative approach to creation and expression in music.

Visweswaran has created history by his singular, highly specialised technique of playing on veena, full aalaapana of ragas, totally devoid of the use of the right hand fingers.

Visweswaran is a musical composer with over a hundred and fifty compositions in Sanskrit, Telugu and Kannada to his credit, which are professionally acclaimed.

Visweswaran has enthralled his audiences in several International music conferences and festivals in India and London, Aberdeen, Durham, Edinburgh, Dublin, Belfast, UAE, Singapore and Malaysia and on many invitations from British Universities, with the honour of Govt. Of India deputation as the leader of the team of Indian musicians.

Visweswaran has made a mark as a teacher of experience of seven decades and has disciples of many nationalitis who have distinguished themselves in the field of music.

Visweswaran is the only personality in the Country with the combination of a Vainika-Vocalist-Musicologist-Thinker-Speaker-Author of invaluable books and articles.

Honours and Awards of special significance: