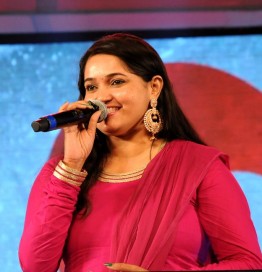 Anuradha Bhat is an Indian playback singer for the feature films. She sings predominantly in Kannada language films. Bhat has recorded for over 600 feature films under the music direction of all the prominent Kannada composers like Hamsalekha, Gurukiran, V. Harikrishna, Mano Murthy, Arjun Janya among others. She has recorded more than 5000 songs for various music albums. Bhat won the Karnataka State Film Award for Best Female Playback Singer for the year 2012–13 for her rendition in the film Little Master (2012).