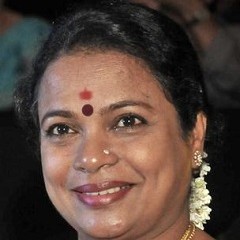 Umashree (Kannada: ಉಮಾಶ್ರೀ) (born 10 May 1957) is an Indian actress and politician. She is known for her portrayal of film roles spoken in the Kannada language (over 400), particularly comic roles. In 2013, Umashree became a Member of the Legislative Assembly in Karnataka in the government of Siddaramaiah where she was minister for women and child development, empowerment of the differently abled and senior citizens, Kannada language and culture.