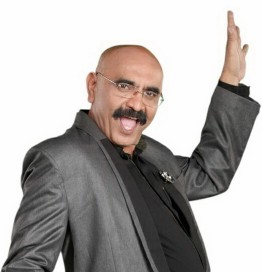 His wife Sihi Kahi Geetha and he were the main protagonists in an old Doordarshan Kannada serial titled Sihi Kahi[1] which was telecast every Friday at the 7.00-7.30 slot, between 1986-87. Those being initial days of Doordarshan, the show had a large viewership and the serial was extremely popular with the Kannada audience . It was a situation-comedy (sitcom) serial in which Chandru and Geetha enacted the role of a husband and wife. Their friendship blossomed into love and later they walked down the matrimony aisle even in real life on the 9th of November, 1990. Their success in the serial gave Chandru the name “Sihi Kahi Chandru” and Geetha the name “Sihi Kahi Geetha”. He is also a noted theatre personality, known for his famous comedy play Neenaanaadre naaneenena?’ (Kannada: ನೀ ನಾನಾದ್ರೆ, ನಾ ನೀನೇನಾ?) (If you are me, then am I you?) an adaptation of Shakespeare’s play The Comedy of Errors, incidentally also adapted in film a production in Hindi (Angoor (1982 film)).

His cooking TV show Bombat Bhojana on Kannada TV channel Suvarna is a big success. His cooking style and concept of cooking is intended at making cooking an easy task and encourages men to try their hand at the more female dominated domestic chore of cooking.

He has acted in many Kannada movies as a comedian and supporting actor. He is best known for his comedy scenes with Bank Janardhan and Umashree. He had a crucial cameo in the 1990 film Ganeshana Maduve (by Phani Ramachandra) as a tax inspector. His performances are highly appreciated by peers and audience.The nickname of “sihi kahi” a phrase referring to the collocation of bitter sweet in Kannada, is attributed to the diversity of roles that he has portrayed, from comedy to negative roles. His popular works include ‘Gowri Ganesha’,’Putakkana Highway’ and ‘Tenali Rama’.

As a director, Chandru has directed television serials Silli Lalli and Paapa Pandu.