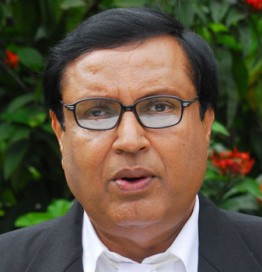 Mukhyamantri Chandru (Kannada: ಮುಖ್ಯಮಂತ್ರಿ ಚಂದ್ರು) (born 28 August 1953) is a Kannada movie actor and politician who resides in Bangalore, Karnataka. He is a versatile actor, easily fitting into comedy roles or playing more serious parts as a villain. Mukhya Mantri was a popular Kannada drama in which he played the lead role, during the 1970s and 1980s, which resulted in getting the prefix to his original name. He is President of Kannada Abhivriddhi Pradhikara, a Government Authority which looks after implementation of Kannada language in Karnataka and as a President, he holds the rank equalent to a Cabinet Minister of Government of Karnataka